In January 1908, Santander Council agreed to donate the Magdalena Peninsula to H.M. King Alfonso XIII and to build a Royal Palace by popular consent. 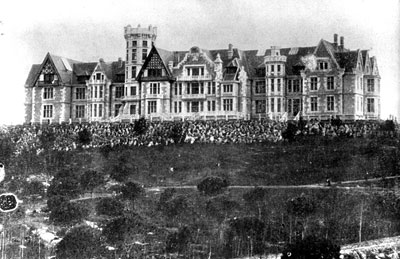 The Council organised a contest to choose the architectural project for the building. The Santander architects Gonzalo Bringas and Javier Gonzalez Riancho were the successful candidates. On 4th August 1913, the King and Queen took possession of the Palace, furnished and decorated under supervision by Queen Victoria Eugenia.

The Palace was the royal summer residence for 17 years. After the Second Republic was declared in April 1931, the Palace was closed. The following year, the Government approved the decree proposed

by Fernando de los Rios, the Minister for Public Instruction, by which the Santander International Summer University was created. The courses would take place in the Magdalena Palace and the historian and linguist Ramon Menendez Pidal was appointed Rector. The same decree appointed Pedro Salinas, poet and professor, as General Secretary. Salinas was the true inspiration behind this new and singular university institution.

In the summers from 1933-36, a number of courses on the most relevant subjects from the era were delivered in the Palace. They included Spanish language and literature for foreign students, which had been taught by the Menendez Pelayo Society since 1926, and the courses for postgraduates at the Medical Institute took place at Valdecilla House for Health.

The International University's activities were interrupted by the Civil War, but in the summer of 1938 the Ministry for National Education entrusted the Menendez Pelayo Society with the organisation of language and literature courses for foreign students. In November 1945, at the instigation of the Minister for National Education, Jose Ibanez Martin, the Government approved a decree which created the Menendez Pelayo International University, with headquarters in the former San Rafael Hospital. The new institution began its teaching in 1947, mainly in the Monte Corban Seminary, but also in other educational centres around the city.

In the summer of 1949 the University's headquarters once again returned to the Magdalena Palace, kindly conceded by H.R.H. Juan de Borbon, Count of Barcelona.

Its first rector was Ciriaco Perez Bustamante, who maintained the University's three main academic activities: the courses on contemporary problems

and humanities; language and literature for foreigners; and the medical science courses at the Valdecilla House for Health.

Three names headed and reflected the intellectual and scientific quality of the large number of teachers who delivered the various courses: Pedro Lain Entralgo, Rafael Lapesa and Emilio Diaz Caneja. The courses in the educational institution's general programme became increasingly diversified and specialised.

Given the constant growth of the University's activities, a university campus in Las Llamas was created. These buildings housed both classrooms for teaching and residential accommodation for the foreign students studying Spanish language, literature and culture, as well as for students enrolled on humanities courses. In 1968 Florentino Perez Embid succeeded Professor Perez Bustamente as University Rector.

Over time the University came to be known simply by its initials, UIMP, and it was governed by Francisco Yndurain from 1974 to 1980 and by Raul Morodo from 1980 to 1983. During this eight-year period, the University confirmed its status as a notable institution for higher education, capable of overcoming the changes to Spanish life caused by a complex era of political transition. A poet and professor who knew the University well defined it as a genuine "island of liberty".

The reverence and respect for humanistic and scientific knowledge were considered the raison d'être for the institution. From the very beginning its objective has been "to satisfy two equally desirable and indispensable needs for a modern cultural education: attention to the universal human requirements which must arise in any sensitive consciousness, and skill in the elucidation of minutely described technical problems, and which represent a positive advance in a special discipline." Each year saw an increase in the number and specialisation of programmed courses in an endeavour to respond to new tendencies appearing in the fields of social, humanist, experimental and technological sciences, as well as the requirements and expectation of students across the different faculties.

Likewise, the cultural activities relating to music, theatre, poetry recitals, cinemas, etc. were extended, along with the large festivals in the Plaza Porticada, particularly appreciated by the foreign students. At the same time, the foundation of Cantabria University (1972) meant the Las Llamas campus buildings were better employed as they were shared and used by both universities all year round.

An extensive time period and an intensive period in the University's tasks. The Rectors during this period were the professors Santiago Roldan Lopez 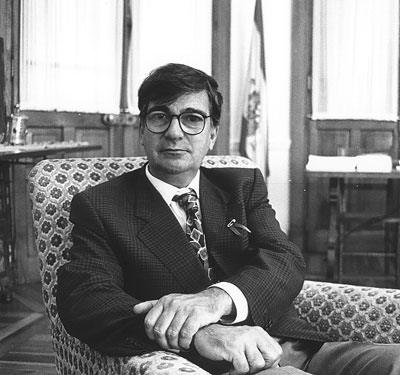 Over the past three decades, UIMP has experienced significant changes in its structure, facilities and operation. The emblematic Magdalena headquarters has been joined by other sites around the country in: Barcelona, Cartagena, La Coruna, Cuenca, Granada, La Linea de La Concepcion, the Pyreneesin Huesca, Santa Cruz in Tenerife, Seville and Valencia. In Santander, the Las Llamas site was extended along with Cantabria University campus to include the Torres Quevedo Greater College residency and several teaching and service buildings. A significant and growing number of UIMP's activities take place on these sites.

In 1993 restoration work began on the buildings of the Magdalena Palace and Stables. Classrooms, lodgings and service areas were renovated and new systems and equipment were introduced to support the teaching staff and to improve the administration. Once these works were concluded, the official inauguration took place on 14thJune 1995, presided over by King Juan Carlos and Queen Sofia.

The University has incorporated new types of courses and activities into its academic programme during this period:

Two new activities have been particularly active over the last decade: the language courses (Spanish as a Foreign Language and Immersion in English) and a growing catalogue of our own and official postgraduate courses, created in collaboration with the CSIC, the Bank of Spain, and other entities.

In 2002 the new University Statutes were published with the aim of providing a better definition of their objectives, governing structure and operation. UIMP was categorised as an autonomous organism within the General Administration of the State.

In institutional terms, the appearance of the UIMP's General Foundation deserves a special mention. It aims to collaborate with and support the University's activities and it has recently been absorbed into the International Planning Foundation for Spanish universities (Universidad.es).

Since 1987 the University has sponsored the annual "Menendez Pelayo International Award," instituted thanks to the patronage of  Eulalio Ferrer (of Mexican and Santander heritage), who sadly passed away in March 2009. The aim of the Award is to highlight the literary or scientific labours of people whose work has repercussions and a humanist dimension similar to that undertaken by Marcelino Menendez Pelayo. It is aimed at Spanish and Portuguese-speaking countries, and candidates are put forward by universities, academies or other cultural institutions and centres.